Monitoring turbid sediment plumes at the mouth of estuaries and analysing their meteorological and oceanographic drivers is important to mitigate the impact of dredging activities on the coastal ecosystems. In all European estuaries, navigable waterways and harbours are regularly dredged. The dumping of dredged sediments locally modifies the water quality by increasing the concentration of total suspended particulate matter (TSM). The impact of such activities is currently little documented. If not properly managed, the excess of TSM resulting from sediment dredging and dumping could result in limiting the underwater light for primary producers and re-suspending organic matter from the hypoxic seabed and bottom water into the water column. The degradation of this organic material by bacteria will consume oxygen and ultimately lead to anoxia with deleterious effects on the marine biota.

CoastObs service provides accurate and timely geospatial information as a result of combining satellite mapping and in-situ measurements, resulting in maps of sediment plumes at a spatial resolution of 10m (Sentinel 2) to 30 m (Landsat 8) with a moderate temporal resolution (at best 5 days). The different plume morphologies were classified and statistically related to the prevailing environmental conditions (e.g. wind, tide, river flow) to identify temporal windows for dredging operations that would have the lowest impact on the environment. The product is however still under development and not fully operational yet.

SPM (=TSM) spatial distribution maps of the Loire estuary were used to derive simple metrics describing the plume morphology. The plume length was estimated from a reference point for three turbidity classes. The objective was to relate the plume metrics to estuarine/hydrological conditions to identify periods when dredging activities would have the lowest environmental impact. A preliminary analysis suggested that the main variables explaining the plume morphologies were the river flow and the tidal range while the wind direction and strength had a lower influence. CoastObs is developing this product for the port of Nantes/Saint-Nazaire in order to reduce the environmental impact of its dredging activities. 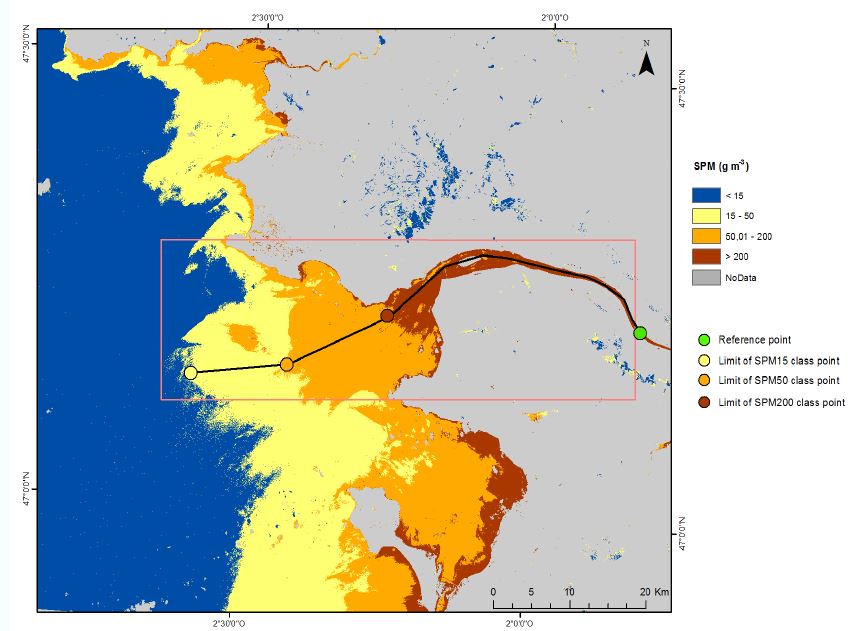