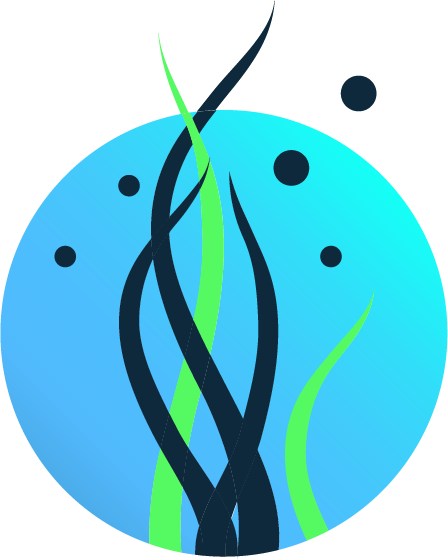 Seagrass meadows are ecosystems considered as important blue-carbon sequesters and biodiversity reservoirs. They provide many environmental services, acting as nursery and habitat for a variety of marine flora and fauna, contributing to sediment stabilization and mitigating coastal erosion, and regulating nutrient cycles and water turbidity. Seagrass meadows are integrating indicators of the health status of coastal ecosystems due to their sensitivity to toxic substances, changes in nutrient balance, light availability, hydromorphology, and other human impacts.

CoastObs provides validated maps of seagrass cover in intertidal areas. The maps are obtained from the high-resolution (10 m) Sentinel-2 satellite mission and could be used to monitor the status of intertidal seagrass meadows at both regional and continental scales, as well as to study their seasonal and interannual dynamics.

The algorithm to transform satellite data into biologically-relevant indicator (i.e., seagrass cover) was developed and validated in several study sites along the European Atlantic coast (namely the bays of Cadiz, Marennes-Oléron, and Bourgneuf), thus guarantying geographical robustness (see Zoffoli et al., 2020 for more details). Sentinel-2 maps of seagrass percent cover were successfully validated in 2018 and 2019 using a total of 64 in situ stations. In each station, seagrass percent cover was computed from the average of 5 squares of 0.25 m2 . The validation resulted in a root mean square difference (RMSD) of 14%, a bias of -2.09%, a mean absolute difference (MAD) of 10.45%, and a linear correlation with a R2 of 0.79 (p < 0.001).

Yearly Sentinel-2 maps of seagrass percent cover (SPC) were computed in Bourgneuf Bay since 2015, during the late summer seagrass seasonal maximum. The map of the 14 September 2018, which is shown as an example below, was selected from 23 satellite images acquired over that year. The high-spatial resolution (10 m) makes it possible to detect fine-scale features such as the fractal network of intertidal channels meandering within the seagrass meadow, to analyse the spatial distribution of the meadow, as well as to accurately measure the area of seagrass patches over a gradient of percent cover. The surface area of the dense meadow (i.e. seagrass percent cover > 50%) can for example be accurately assessed and compared with the surface extent of the whole meadow. Such data is of valuable interest for coastal monitoring programs such as the Water Framework Directive because it provides a representative and spatial-rich indicator of the status of large seagrass ecosystems, unamenable to the sole field observations. 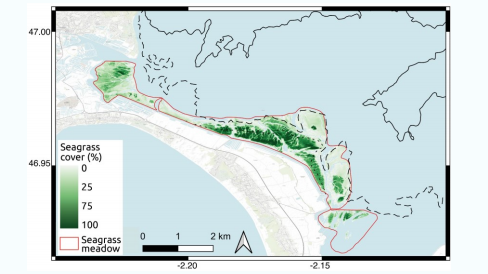