We all have seen the videos of the clear waters in Venice. In fact, even fake images were circulating around with crocodiles taking over. But what we haven't seen yet is the difference from space. The Copernicus Sentinel-2 satellite is helping to monitor the evolution of the Venice lagoon water transparency, and CNR is bringing the images to us:

On the first date (on Feb 20, Figure 2, left panel), one can notice the boat traffic around Venice, especially in Giudecca Channel, from Venice to Murano and towards the airport, and from Murano to Burano.

March 11 image (Figure 2, middle panel), when the lockdown was in place and boat traffic almost stopped, still shows a very high concentration of suspended sediments due to wind-driven resuspension following strong winds blowing on the lagoon. Wind-driven resuspension is an important process controlling the presence and concentration of suspended solids in the lagoon.

Water on the March 19 image (Figure2, right panel), when the lockdown was still in place and boat traffic almost stopped, and also with no more strong winds blowing on the lagoon, is then very clear with less suspended matter in the channels and surrounding areas, particularly from Venice to Murano and towards the airport, and from Murano to Burano.

The image below shows the water turbidity in the Venice Lagoon on the same three dates. On March 19, water now looks clearer because there is less traffic on the canals. There are no more waves caused by motorized boats, cruise ships and gondolas, allowing the sediment to settle and stay trapped at the bottom. Turbid waters have now let the stage to transparent ones; in particular, it is possible to notice the lower turbidity values in the channel from Venice to Murano and the Airport and in the Airport Marina. 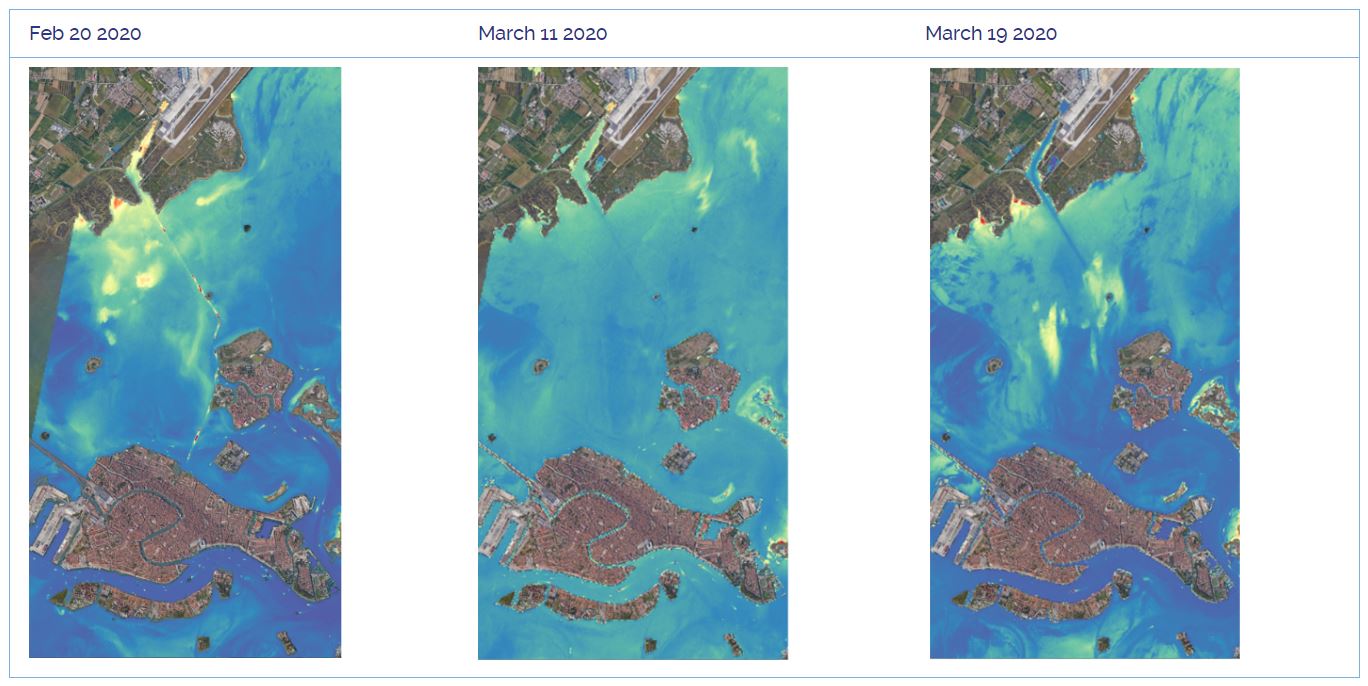 The Copernicus Sentinel-2 true color images and turbidity derived products in the Venice lagoon allow monitoring the evolution of the water transparency before and after the stop of boat traffic due to the COVID19 pandemic. Globally, waters are more transparent after COVID19 confinement than before. Nevertheless, even when boat traffic is down, waters can stay turbid when strong winds are blowing in the lagoon, as wind-driven resuspension is an important process controlling the presence and concentration of suspended solids in the lagoon.